With Amtrak's® Silver Service® trains, you have the possibility of visiting practically the entire East Coast of the USA, from New York, via the capital of Washington, to as far south as Miami, Florida.

Your journey begins in New York and ends in the southern United States, the eternally-sunny Miami, Florida. The eastern part of the country not only includes some of the largest cities in the US, but also beautiful beaches on the coast of the Atlantic Ocean and rich multicultural areas, especially in the southern states. The Silver Service consists of two trains - Silver Meteor® and Silver Star®.

The entire route is 2,235 km long and runs through some the USA's largest cities. After leaving New York, the Silver Meteor passes through Philadelphia, Baltimore, Washington, Richmond, Charleston, Jacksonville and Orlando, before completing its run in Miami.

The route of the Silver Star is similar to the Silver Meteor, but slightly longer at 2,449 km. The only difference is in North and South Carolina, where the train travels inland via Raleigh instead of Charleston.

Both trains then return to the same route in Savannah, Georgia. Click on the map below to enlarge it. 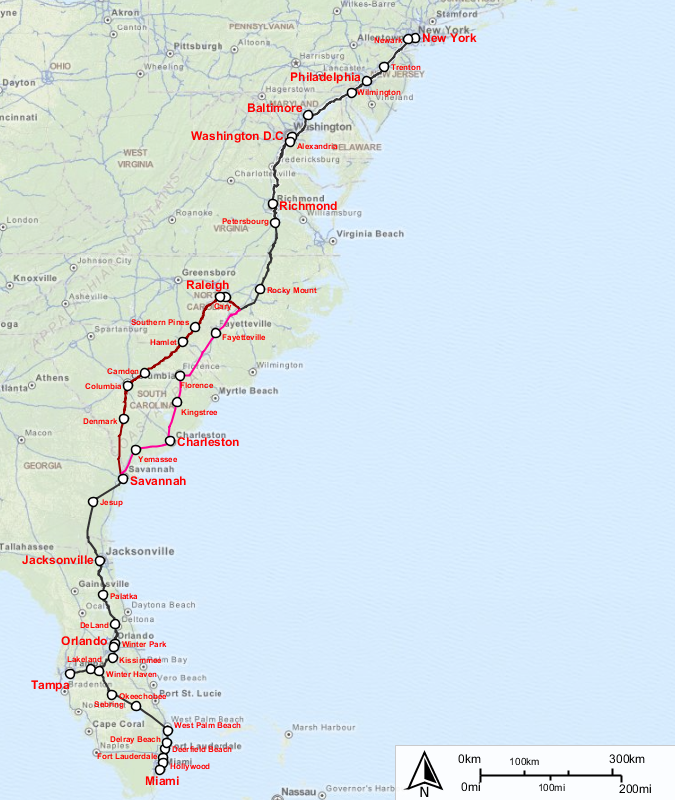 You can spend the voyage of over 28 hours in Amtrak's® comfortable carriages, and also in the unbelievably comfortable Viewliner® sleeping cars. Read and see more about the Silver Service's carriages!

Contact Polrail Service today to plan your railway journey in the USA!


Amtrak is a registered service mark of the National Railroad Passenger Corporation.